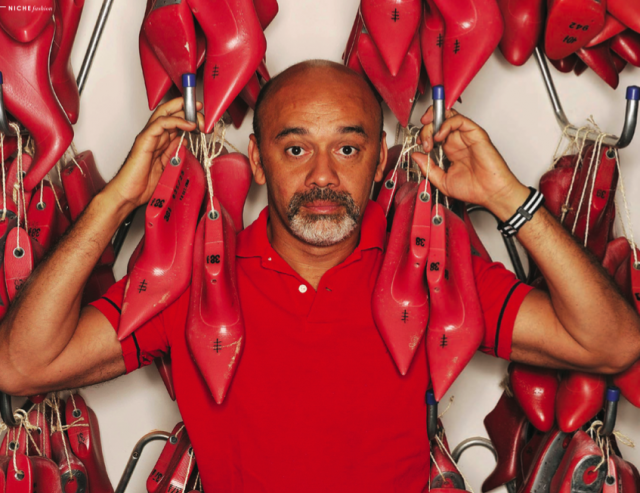 Christian Louboutin is a true shoe aficionado and his passion for spiked beauties has translated impeccably into prestigious designs that resound through the fashion industry and have a near cult following.

Christian Louboutin discovered his adoration of stilettos by accident while visiting a museum in the early 1970’s. The entryway to the facility had a sign showing a woman’s shoe with a long, slender heel. The sign was there to prevent women wearing stilettos from entering, to protect the wooden floors. Louboutin had never in his life seen a shoe with a heel like that and he became enthralled with the image.

At age 16, Louboutin began sketching shoes with those wondrous thorn-like heels; he amassed an impressive portfolio filled with innovative designs. At age 18, he decided to pursue a career in shoe design, and after calling several design houses in Paris, he landed a coveted internship with Dior, working under then Fashion Director, Madame Hélène de Montferrand.

Louboutin opened his first shoe salon in Paris. It was 1991, and his very first customer was Princess Caroline of Monaco. The most elite and fashion forward women soon followed. One day in 1993, while working on a design inspired by Andy Warhol’s Flowers, Louboutin felt like something was missing from the prototype. His assistant was painting her nails a spectacular shade of red; Louboutin took the nail polish and painted the sole of the prototype red, and suddenly it was complete. His clients adored the look so much that it quickly became his signature. Louboutin has gone on to create a handbag line and menswear line. Throughout his 42 international boutiques, he sells over 600,000 pairs of red soled shoes annually.

FROM the Holiday 2013 issue of NICHE