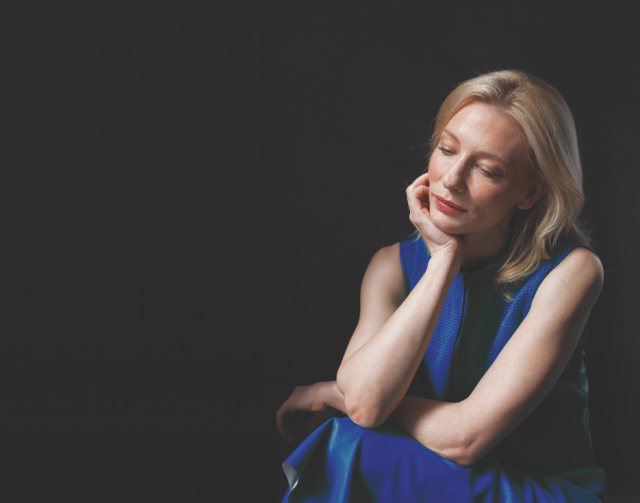 Ever since Cate Blanchett and her husband took over as the artistic directors of the Sydney Theatre Company in 2008, she’s pulled back the reins on her movie career. She aced supporting roles in Hannah (2011) and Robin Hood (2010) as well as The Hobbit: An Unexpected Journey (2012), but the last film she top-lined was 2007’s Elizabeth: The Golden Age. With Blue Jasmine, Blanchett came back in a big way. The actress plays the title role in the Woody Allen film, a hard-core drama that has already racked up rave reviews.

In Indiewire, Anne Thompson predicted that the Best Actress Oscar was “Blanchett’s to lose.” Variety said that the actress’s performance “is a brilliantly bipolar piece of acting.” And Entertainment Weekly pointed out that Blanchett “makes Jasmine at once ardent, touching, off-putting, and cracked in her grand delusions.” A huge fan of Woody Allen’s work, Blanchett only spoke to the filmmaker by phone for about three minutes before, essentially, agreeing to do the role.

“When you get a call from Woody, you take it.” says Blanchett, 44. “You’ve already said ‘yes’ before you know what it is, so you just hope it’s a good one. Of course, these films are never less than fascinating.

“I’d given up hope of ever working with him; I just thought he wasn’t interested. But the minute I read it, [I knew] the script was fantastic. It is impeccably structured. It’s absurd and tragic, often simultaneously.” As the title character, Blanchett brings to life a woman whose charmed existence as a Hamptons socialite comes crashing down around her. After her financial fraudster husband (Alec Baldwin) is imprisoned, Jasmine is left with no money and no place to go.

ICONIC SNAPSHOT
Cate Blanchett was nominated for 29 awards worldwide for her role as Jasmine in Woody Allen’s Blue Jasmine, and she took home the trophy a staggering 28 times, including the most noteworthy:

Academy Award: Best Performance by an Actress in a Leading Role

Golden Globes: Best Performance by an Actress in a Motion Picture – Drama

After anticipating what it would be like to work with Allen for so many years, Blanchett says the reality was better than she imagined.

“I had heard that [Allen] was monosyllabic at best in relation to the direction he gave actors, but when I asked him questions, he responded if the questions were interesting and if they weren’t, he waved me off and went back to his BlackBerry.

During one discussion, Blanchett asked Allen how he’d play Jasmine if he were a woman.

“He said, ‘Well, if I were playing Jasmine,’ and at this point he got quite Blanche DuBois- like,” recalls Blanchett. “So I asked him if he considered playing this role and he thought about it for a minute and a half and said, “No, it would have been too comic.’ But I could have easily imagined it. That was a movie that I would go see.”

Blanchett might be half-teasing but early reviews of the film have picked up on the similarities between Blue Jasmine and A Streetcar Named Desire. Strangely enough, Blanchett played Blanche in a 2009 Sydney production of the Tennessee Williams classic.

Some reviewers have also noted the parallels between Jasmine and Ruth Madoff, the wife of disgraced money manager Bernie Madoff. But Blanchett cautions against making too much of the connection.

“Well, there’s a lot of people who’ve fallen from grace. But, yes, of course, [research] is part of my job and part of the pleasure of my job. I’d followed the scandal like everybody else.”

“But there’s a whole miniseries in that fiasco. Woody didn’t want [me] to solely base [Jasmine] on that because this isn’t [Madoff’s]story.”

Ruth Madoff aside, Blanchett was immediately struck by the movie’s timeliness and the way it reflected a country of haves and have-nots still struggling with high unemployment figures.

“I think [what happened to Jasmine] is happening all across America and all over the world,” says the actress. “People’s sense of self is being bound up in a relationship or their financial status or their social circle, so when all of that is ripped away, you have to, in midlife, look at yourself and say, ‘Who the hell am I?’

Swilling martinis and knocking back Xanax, Jasmine becomes more and more unstable as the movie goes along. She also becomes increasingly envious of the happiness Ginger seems to have. Modulating “the madness” was one of Blanchett’s trickiest assignments.

“Obviously I’m not so method that I went and took Xanax every night, but you can find amazing stuff on YouTube. It was important for me to chart through when she’d taken a Xanax, how many she’d taken and if she’d mixed it with alcohol and what the physical and mental effects would be.

“Also, what I was trying to [portray] was that sense that in the beginnings of her having a panic attack, she might break out in a sweat yet everything else is completely fine. Her physical state and her psychological state were interesting balls to try and [juggle].”

If anyone can juggle Jasmine’s contradictions, it’s Blanchett, who can seemingly do anything. This is a woman who’s played Queen Elizabeth I, Kate Hepburn and Bob Dylan.

She’s toggled effortlessly from leading roles in The Good German and Veronica Guerin to supporting parts in The Talented Mr. Ripley and The Curious Case of Benjamin Button. She’s also managed to embrace both blockbusters (the Lord of the Rings movies, Indiana Jones and the Kingdom of the Crystal Skull) and art-house fare (Heaven, Notes on a Scandal).

She’s been nominated for seven Oscars and won once for playing Hepburn in The Aviator. After winning for Blue Jasmine, she is now in the same company as Diane Keaton (Annie Hall), Mira Sorvino (Mighty Aphrodite), Penelope Cruz (Vicky Christina Barcelona) and Dianne Wiest (Hannah and Her Sisters, Bullets Over Broadway), all of whom have netted Oscars for Woody Allen movies. How would Blanchett rank Jasmine in relation to Allen’s other classic heroines?

“I’m not going to go into the ranking thing. I’d think I’m at the bottom but I’m so privileged to be playing the title role in a Woody Allen film. When you think about Diane Keaton in Annie Hall and Judy Davis [in Husbands and Wives] — they’re just brilliant [performances]. “[Keaton and Davis helped] create fascinating, unique, mind-bending characters.”

Blanchett’s turn in Blue Jasmine is just the beginning of a rash of film work. In addition to popping up as the Elf Queen, Galadriel, in the remaining films in the Hobbit series, she also recently shared the screen with George Clooney in the Clooney-directed The Monuments Men, a World War II-era thriller about the efforts of art historians to reclaim some of Europe’s greatest paintings from the Nazis. Blanchett still calls Australia home. She lives there with screenwriter-husband Andrew Upton and their three boys, aged 12, 9 and 5. The family travels with the actress wherever she goes, as much for her sake as theirs.

“When my children are with me, they’re not interested if you’re playing Blanche DuBois or Jasmine, they just want you to help them do their homework, play with them and feed them,” says Blanchett. “So, I find that a great leveller. It means you have to switch off.”

From inside the 2014 summer issue of NICHE