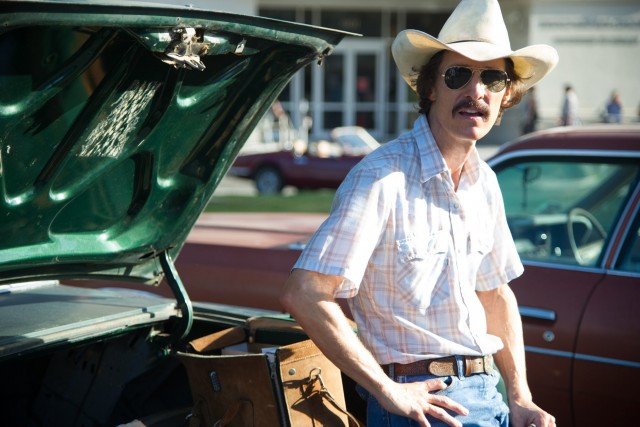 After swearing off romantic comedies and action movies, including a big-screen transfer of Magnum P.I. that would have reportedly earned him a $15 million payday, the Texas-born actor has reinvented himself as a hardworking indie icon.

His winning streak began in 2011 when he played an unscrupulous attorney in The Lincoln Lawyer. Next came the supporting role of a sheriff in buddy Richard Linklater’s Bernie. Then he switched gears to portray a depraved hitman in William Friedkin’s Killer Joe, a gay reporter in Lee Daniels’ The Paperboy and a stripper in Steven Soderbergh’s Magic Mike.

Earlier this year, McConaughey gave a terrific performance as a lovestruck fugitive in Mud, a small movie that wound up scoring big with audiences. While his recent turns have netted him plenty of positive reviews, McConaughey has yet to earn an Oscar nomination. That all changed when Academy members got a chance to review the actor’s work in Dallas Buyers Club.

Based on a true story, the movie spins the saga of Ron Woodroof, a bigoted Texas electrician who in 1985 was diagnosed with AIDS and told he had 30 days to live. “I ain’t no faggot!” is Ron’s initial reaction to the horrible news. Desperate to survive, Woodroof initially used the drug AZT, but after learning of its ineffectiveness he began researching alternative treatments.

Soon, he was travelling to Mexico and scoring non-FDA- approved meds for himself and other AIDS sufferers. He dubbed his business the Dallas Buyers Club and was able to stay alive another six years before perishing from the disease.

“Here’s a guy with a seventh-grade education and he became a damn scientist of HIV,” says McConaughey. “He studied it more than a lot of the doctors did. He went and [conducted] his own research. And this was a time when nobody really knew, even doctors didn’t know, what the hell was going on [with HIV].”

McConaughey was just 16 when he recalls hearing the word “AIDS” for the first time.

“I was freaked out and I remember when I went to see a doctor for a physical that year, I didn’t let him get away with a quick handshake,” says the actor, who turned 44 last November.

“I remember talking to different doctors and they would all give you a different answer about HIV. I was asking as a heterosexual man who was not being overly loose with my intimacy. I remember going, ‘I want some percentages.’

If you check out Dallas Buyers Club, you might be shocked by McConaughey’s appearance. In the months leading up to filming, the actor ate little besides fresh fish and vegetables. Normally 182 pounds, he went down to 135 pounds for the length of the film’s month-long shoot. McConaughey insists the weight loss, which makes him look like a walking cadaver, wasn’t a stunt but necessary to allow him to slip inside Woodroof ’s skin.

“It’s saying, ‘For six months, I’m not going to act like this guy, I’m going to be this guy,’” explains the actor.

Since Dallas Buyers Club was shot on the cheap, McConaughey didn’t have the luxury of shooting the film in sequence, gradually losing weight as he went along.

“This wasn’t a studio film like Castaway [where Tom Hanks shed his weight over the course of a few months]. There was talk about having Ron put on weight at the end [when he’s recovering] but we didn’t have time.

“We had to shoot it all in 27 days. Basically through the whole film I was 135 pounds. When Ron was sick, we didn’t put any colour on my face. When I was more healthy, we put plumpers on my backside and I loaded up my cheeks with colour so I looked healthier. We’d shoot the healthy Ron in the morning and that afternoon, we’d shoot the emaciated Ron.”

One of the reasons McConaughey was drawn to the movie was director Jean-Marc Valle’s determination to keep sentimentality at bay. As the actor sees it, Woodroof undergoes no big changes over the course of the movie. Woodroof does realize he has more in common with ostracized gay men suffering from AIDS than he does with his former friends. But, in other ways, he’s still the same dude he was before his diagnosis.

“We don’t have Ron go, ‘I’m sorry. I can do good now,’” says McConaughey, who also had a cameo role opposite Leonardo DeCaprio, in Martin Scorsese’s Wolf of Wall Street.

“I really wanted us to stay with the anarchy of this guy, the bigoted bastard, the guy who’s out for self-preservation, the businessman, the guy wants to be Scarface. I felt as if the cause and the crusader and the activist would be revealed if we stuck to that guy. You can’t ever have him be conscious of the fact that he’s leading the cause.”

While Woodroof remains a me-first kind of individual, he does have a change of heart about Rayon (Oscar-worthy Jared Leto), a drug- using transvestite who, at the beginning of the movie, shares the same hospital room as Ron.

“When Ron becomes an outcast, he connects with Rayon, who is already an outcast,” says McConaughey. “They’re kind of stuck together so they have to make it work, first on a business level and then on a more human level, when they discover they give a damn about each other.”

McConaughey only had a few weeks off between shooting Magic Mike, Mud and Dallas Buyers Club but he’s not complaining about his workload. In fact, he’s happy to be toiling on movies he’s passionate about.

“This is a really healthy time in my career,” he says. “I’m enjoying and loving acting more than I ever have and I’m getting so many great experiences from my work.”

McConaughey, who is married to Camila Alves with whom he has three kids, credits his family with helping him run his life, and career, so smoothly.

“I’ve got a really great support system in my family. Where I go to work, they allow me to put the blinders on. And if I don’t have them on, they crack the whip.

“I’ve got a wife who allows me to not look in the rear-view mirror. And I’m still getting time with my family.”

As far as McConaughey is concerned, his family is also key to his growth as an actor.

“Kids sure help the job I do,” he says. “They remind you that you’re playing make-believe so let’s make ’em believe. They remind you to be goofy as hell, which frees up the instrument.

“They remind you that you’re not really acting, you’re behaving and you’re having fun and it is fun. Even the hard work is fun. Going down 47 pounds was fun. I had to have a singular focus and it gave me something to grab onto [when I played the role].”