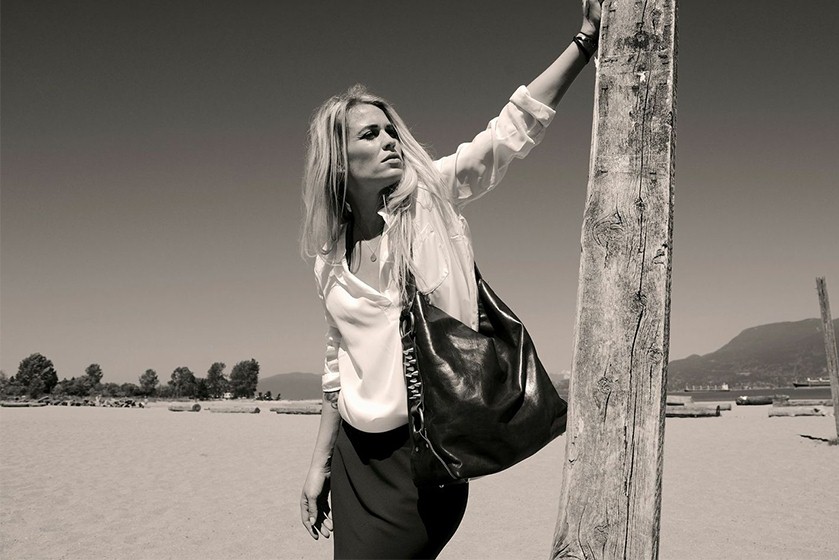 Known in the industry as The Academy Awards of Handbags, the (IHDA) is a global accessories event that recognizes both emerging and established designers. The (IDHA) http://www.handbagdesigner101.com/independent_handbag_designer_award partners with InStyle Magazine, and is hosting its seventh competition this year with winners announced on June 19th in New York. Their goal is to find the designers of the next “IT BAG.”  Many of the industry’s top talent got their start at the IHDA.  Stefani was chosen as the only Canadian, from among 1,200 international applicants from across Europe, the U.S, Brazil, Japan, the UK & Colombia. Lloyd and Wolf is a Canadian brand that designs luxurious, beautifully crafted handbags with a distinct rock’n roll edge. Breaking into the fashion world last season with their debut collection, Lloyd and Wolf has quickly become known for its line of unique, limited run handbags featuring luxe Italian leathers, and the line’s signature studs and spikes. The fashion elite have quickly taken notice of the line, and starlets, rock stars, stylists, fashion’s editors now carry Lloyd and Wolf bags.

Creative Director Larissa Stefani started her company only two years ago, after having taken a hiatus from the fashion world to have her children.  After a devastating diagnosis of Lyme Disease, eighteen months ago, Stefani launched her brand.  “I quite desperately needed something to do rather than feeling sorry for myself, and wanted to think about something other than my symptoms. Having a creative outlet has always been very positive for me and I was keen to learn about, and work with leather. I’ve always loved handbags, so it was a natural progression” says Stefani.

The designer resides and has her design studio on stunning Bowen Island, an island municipality in Howe Sound, adjacent to Vancouver. Working close to home has its advantages as Stefani is juggling her start-up design firm, with raising two young children.

Stefani entered her signature “Abi” bag into the international competition, and almost fell off her chair when they called her to let her know she was a finalist. Says Stefani ”I think I am still in shock. The lead up to the event has been a very surreal experience, and I am finding myself a bit speechless as it has started to sink in. This is a huge opportunity for me, not to mention an overwhelmingly big honour to be the only Canadian amongst some seriously talented and established European designers in my category.”  Notable fans of the “Abi” bag include rocker Alanis Morisette, and actresses Morena Baccarin, and Meghan Ory.

Buzz has been building both locally and internationally for Lloyd and Wolf since Stefani was announced a finalist in May.  She has appeared on her local CTV News, in various glossy editorial spreads, and her “Abi” bag will be included in the August edition of British Vogue.

Stefani is eligible to win in two categories, one for Best Overall Design, and in the Audience Fan Favourite Award. Hosted by InStyle.com, the 2011 IHDA’s Audience Fan Favorite recipient received over 335,000 online votes.

Past winners have gone on to huge successes, including distribution of their handbags at Saks Fifth Avenue, Bergdorf Goodman, Barney’s New York, and Harrods.  The competition has also landed winners in lead design roles at Cole Haan, Burberry, Devi Kroell, and Foley & Corrina. Past winners have seen their bags on the arms of A-list celebrities and in fashion focused television shows and movies including Sex and the City, and Gossip Girl.

Winners will be announced on June 19th, and Stefani and her husband are rather excited to be traveling to New York for the announcement.