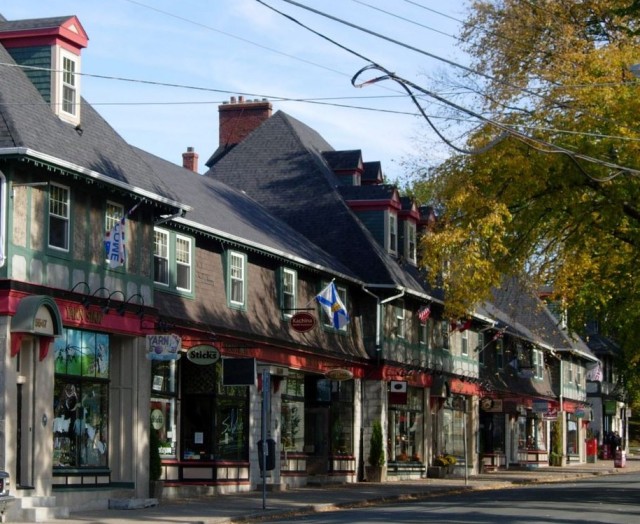 I was fortunate enough to be part of an invited group on a monumental travel experience trip called Nova Scotia Joy Ride. It was eight days of exceptional travel, exploration, fun and educational adventure, in and around Halifax. I was in awe of the immense historical importance of the City of Halifax and what it means to Canadians. After the welcome party at Pier 21, we broke up into small groups of four; my group included me, Ariane Colenbrander from Vancouver, and New Yorkers Vicki Salemi and Yvonne Yorke – as well as our always smiling, ever optimistic guide, Regis Dudley from Destination Halifax. We dubbed ourselves The Lipstick Brigade. For eight days, we pretty much did everything together, and boy, did we have fun! For this instalment, I wanted to share my experience at Hydrostone, and the effect it had on me.

Whether you are a history buff, a lover of quaint village living or just a perennial cheerleader for the underdog, a visit to the Hydrostone district in the North End of Halifax, NS should be on your travel itinerary.

It is the true story of the Phoenix rising from the ashes, and how this community thrives today is testament to its resilient past. On the morning of December 6, 1917, a French cargo ship, SS Mont-Blanc, fully loaded with explosives collided with SS Imo, a Norwegian vessel. The results were catastrophic. Known today as the Halifax Explosion, the blast was felt as far away as Prince Edward Island and caused a tsunami in Dartmouth. When the dust settled, the largest man-made explosion in history prior to nuclear weapons, had claimed thousands of lives and levelled more than 400 acres in Halifax; every structure within a 2.6 kilometre radius was destroyed, including what is now known as Hydrostone.

The first rebuilding of the district occurred in 1920, and the quaint village architecture is part of what makes Hydrostone so special. If you know the history of the region, the emotion you feel as you drive into Hydrostone, will take you by surprise and is truly something quite extraordinary.

Of course with history comes tourists, and with tourists comes modern commerciality. I am all for mixing past with present! On the main street, I was immediately drawn to Props, one of the prettiest little flower shops I had ever seen. Lucky for my pocketbook, I was running out of luggage space for souvenirs, because their garden pottery was divine! However, I can always find room for interesting clothing and artisan jewellery, and it was easy to find beautiful things in Lady Luck boutique. Although I wasn’t in the market for a new hat (although I was tempted to buy an adorable vintage inspired bathing cap hat), her collection was impressive and rivalled any large city milliner.

After a little shopping, our group of five settled into our table at Epicurious Morsels for a gastronomic lunch. I was so impressed by the international menu, and the use of so many local, fresh ingredients. A must on their menu is the Lobster Strudel so that’s what I ordered; a delicious lunch roll that consisted of lobster, spinach, & chevre cheese rolled in phyllo pastry, and served over a tomato & armagnac sauce.  Asking around, I learned that a local favourite on the menu is the Pear & Roquefort Salad – made fresh to order with pears, Roquefort cheese and served on a bed of mixed greens, roasted walnuts, and walnut oil infused vinaigrette. We were invited to have our dessert on the street side patio and it was the perfect spot to indulge in a sinfully rich chocolate ganache torte pie and a little people watching.

With a very full belly, and the urge to explore the non-commercial charm of the Hydrostone District, I headed out on my own for a walk around the neighbourhood. I left the touristy track of Young Street, and meandered over to Kane Place and Hennessy Place. This is where you can still see the remnants of a city rebuilt. The back lanes behind the houses are charming, and this is the only neighbourhood in Halifax that has them. It is a nod to days gone by, and as I got to the head of Hennessy Place, I stopped on the grassy boulevard, and sat down on a wooden bench that looks back over the street. There was a mother with a baby stroller, a few ladies talking at the end of one lane way, and a young man (quite hipster looking actually) lying on the grass. This neighbourhood was rebuilt with community in mind; the wide grassy boulevards are meant for lovers strolling, neighbours chatting and children playing kickball. The homes are modest in architecture and yet stand proud to represent the past, present and future of Hydrostone.

I always find it exceptionally fascinating how time heals people and places, and Hydrostone is a neighboughood in Halifax which has done so without losing reverence for its history.

The Hydrostone District is in the North End of Halifax, Nova Scotia and consists of ten short parallel streets and is bordered by Duffus Street to the north, Young Street to the south, Isleville Street to the west and Novalea Drive to the east.

There was ample parking – free and paid and lots of sidewalk space for leisurely browsing, even on a busy tourist day.

Venture away from the main street, and head over to look at the homes in the district. The homes speak of a fascinating history and proud rebuilding by its residents.

Check out the village website for more information on current shops, eateries and services.

My special thanks to Pam Wamback at Nova Scotia Tourism and Regis Dudley at Destination Halifax for an amazing East Coast journey!

Gettin’ Back in the Groove: Booking.com’s 7 Predictions for the Triumphant Return of Travel in 2022

Places to Visit Before You Hit 30