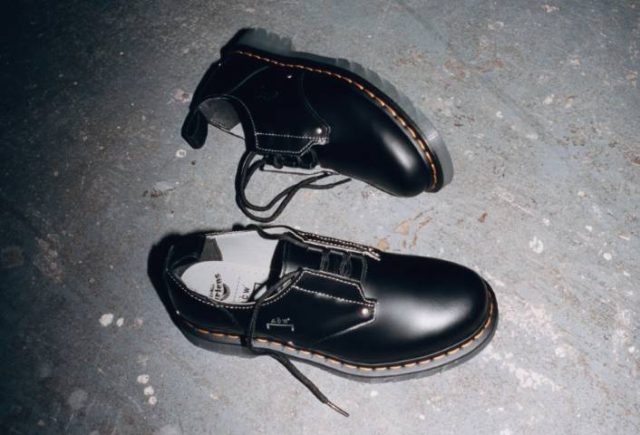 Two British powerhouses teamed together to create a collaboration united by subcultural heritage. Dr. Martens and A-COLD-WALL* are dropping the black edition of their iconic utilitarian shoe launching on November 6.

A-COLD-WALL* was launched in 2015 by Samuel Ross as a response to the British social climate. ACW* instigates a cultural conversation that celebrates the energy of youth across a range of mediums such as Film, music, literature and physical exhibitions.

The Classic 1461 shoe was initially worn by postmen and policemen; it’s a shoe that is comfortable, durable and lightweight. Earlier this year, the brand released the grey edition and is now dropping the much anticipated second collab. A-COLD-WALL* reinterprets the 1461 Bex shoe with the new innovate Iced sole with cutting-edge black EVA drop in with the structural black smooth leather. The details include hidden ghillie lacing, contrast upper stitching and printed with a silver foil A-COLD-WALL* branding on the quarter. Finished with brushed silver metal rivets, a dual branded footbed and a black Smooth leather AirWair heel loop.

VIONIC | The Perfect Boots for Your Fall Wardrobe

COS Launches Capsule Collection Focused on Craftsmanship and Fine Fabrics