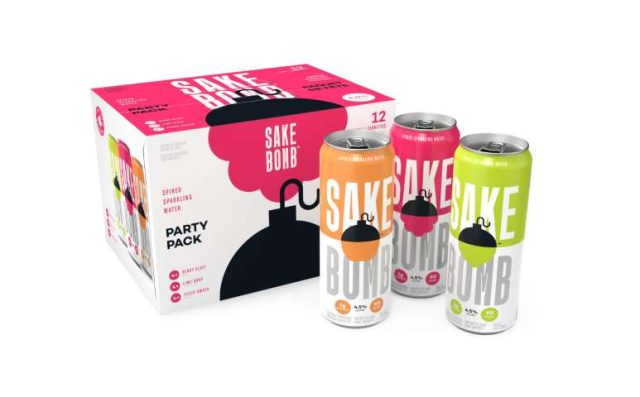 Prepare to be blown away! SakeBomb, a first-of-its-kind innovation in the Ready-To-Drink cocktail category, is exploding on the scene with a smoother take on seltzers. SakeBomb uses premium sake as its base, which is naturally sweeter than many other alcohols, delivering a rich, unique taste that is then enhanced with real fruit flavours.

Proudly crafted in British Columbia, SakeBomb offers a premium quality spiked sparkling water with best-in-class nutritional attributes including low sugar, low calories, and low carbs. And there’s something else in every can – the taste of change. As one of the first female-founded and led seltzer or RTD beverages, SakeBomb is blowing up the status quo by donating a portion of all proceeds to female empowerment initiatives, helping to level out the male-dominated playing field in the alcoholic beverage industry.

The brainchild of an award-winning beverage developer, SakeBomb brings better-for-you innovation to the RTD market. Its base of premium sake offers a light and refreshing mouthfeel that delivers a smoother alternative in the marketplace. Plus, its three killer flavours taste like real fruit:

In addition to its refreshing taste, every can of SakeBomb hits the key nutritional targets that today’s consumers demand:

“SakeBomb is truly a dream brand for us,” explains Stefana Prodea, Founder and CEO, Bomb Beverages Inc. “Not only have we created a delicious, innovative RTD cocktail, but we are also making waves in the alcohol beverage industry with our focus on female empowerment. It’s a dynamite combo that tastes like a much-needed change in the market, and it is only just the beginning of what’s to come.”

Female founded and led, SakeBomb’s approach to disrupting the male-dominated industry with a new perspective is a foundational pillar for the business. In an industry with few female founders or CEOs and general female representation in C-suite roles hovering around four percent*, the spirits industry simply does not reflect the general population. To stand behind the SakeBomb mission, the brand is dedicating a portion of all proceeds to its BombWomen mentorship programs. Planning to launch next year, this initiative will include full development entrepreneurship programs and courses with mentorship matches.

For all the details, including the brand’s expansion into the North American market, please visit www.sakebomb.us.

Come one, come all – join Family Services of Greater Vancouver at The Soirée and support the most vulnerable members of our community