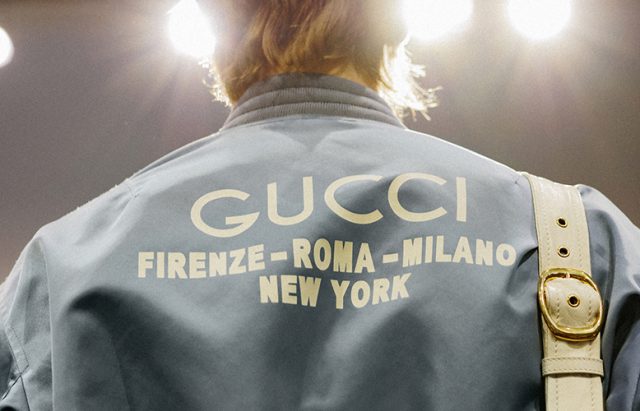 Improvisation is an act of collaboration. When the free impulses of individual minds interweave, collective expressions are conceived. The Gucci Fall Winter 2023 Men’s Collection employs the circumstance of improvisation as a methodology: a constructive tool for creation. As a practice exercised in theatre and music, improvisation is founded in the know-how of its practitioners. When prompted to freestyle, performers access and activate the intuition of their craft. Embracing the curiosity and candour carried by improvised ideas, the collection is a natural reflection of the individualities represented by the multi-faceted creatives and craftsmen who inhabit the house of Gucci; who draw on diverse knowledge, skill and imagination in the creation of a bigger picture: The aesthetics of improvisation.

The premise is adapted in a live performance by Marc Ribot’s Ceramic Dog. Through a customised soundtrack that develops as the show progresses, the noise rock trio emulates the energies of the collection, building on elements from genres like jazz and punk inherent to musical improvisation. The group appears on a spherical stage around which the show takes place: a circular formation symbolic of the collaborative spinning wheel of the creative community at the heart of Gucci. It constructs a framework for a collection focused on the archetypes of the classic gentleman’s wardrobe, redefined through artisanal luxury amplification and the subversive lens of improvisation. Activated by the diverse expressions of the characters who carry them, the garments speak to different understandings of the seduction instinctive to the masculinities of Gucci.

Crystal GG, a new lacquered interpretation of the house’s coated monogram canvas from the 1970s, emblemises the collection as a tool for visual freestyling. Dipped in the vibrant colors and faded pastels that span the show, the cloth – named for its sheen – is applied to workwear coveralls and appears in bags and shoes oversized and relaxed in construction for a tactile, aged sensibility that imbues them with soul. Throughout the collection, the idea of how the individual chooses to wear a garment or accessory – the gestures, erosion and personality with which it is injected – takes centre stage. The notion is adorned with jewellery that conjures memories from the Gucci archives – the Piston Lock, the Horsebit, the Cross – and invoke a feeling of personal, sentimental relics.

A voluminous but languid tailoring silhouette enables improvisation of styling, a sentiment echoed in suits with detachable elements that allow the wearer to transform them into sleeveless jackets and shorts. The free and boundless facets of contemporary masculinities are observed in garments cross-pollinated – either in construction or styling – from traditionally contrasting wardrobes: sportswear informed by Gucci’s 1980s archives evoke the codes of dance, while motorcycling garments pay tribute to archival pieces from the early 2000s or splice with the sculpting of archetypal overcoats. Inspired by the same era, denim trousers faded as if washed with fuel are adorned with the logo originally launched by Gucci in 1953 when the house opened its first store in New York.

Customised pieces pay homage to improvised self-expression: vintage-like foulards are tied around bags and used to patch denim trousers; the revealed lining of deconstructed tracksuits become decorative details; and traditional evening trousers transform into statuesquely-draped floor-length skirts that reveal the legs in movement. The effects lean into constructions which are not what they seem. On closer inspection, a classic jogger is structured in lightweight leather, and a caban that appears as if covered in plume is fully embroidered with multi-dimensional white sequins, amplifying the craftsmanship at the core of Gucci.

The collection features a magnified reinterpretation of the Jackie bag softened in construction and adorned with the Piston Lock originally created by Tom Ford for Gucci, in faded pastel crocodile editions. Select fabrications are echoed in the Dionysus, which materialises stripped of its original decorative construction, but still bears its emblematic double-edged tiger-headed horseshoe buckle and a new leather strap.  Garment bags worn as shoulder bags are crafted in coloured coated canvases, while the Crystal GG canvas features in a new rectangular relaxed holdall proposed in the palette of the collection, and in a classic 1970s round-toed ankle boot. It appears alongside a heeled slipper, a Princetown slipper expanded in dimension with the signature green-red-green web, and a Horsebit loafer with a lived-in effect, reflecting the collection’s emphasis on personalisation. A soft, quilted motorcycle boot makes its debut in a multitude of colours.

Valentine’s Day at Fairmont Hotels in Vancouver and Victoria