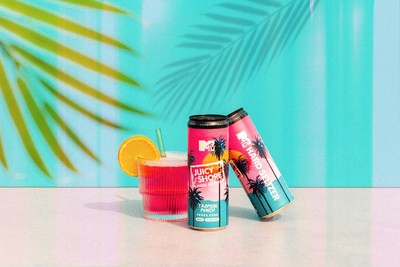 Today, Steam Whistle Brewing announces the launch of its exciting new ready-to-drink cooler MTV Hard Seltzer, Juicy Shore.  This collaboration with MTV Entertainment Group and Paramount Consumer Products extends the ways consumers can celebrate with this global powerhouse media brand. MTV has led pop culture worldwide for over 40 years by fueling conversation while being the ultimate music insider. “I want my MTV” could indeed be the anthem of 2022.  MTV Hard Seltzer, the must-try, refreshing vodka cooler, will be distributed by Steam Whistle initially across Ontario liquor stores, bars and restaurants.

This new Hard Seltzer plays off MTV’s Jersey Shore. For the last five seasons Jersey Shore Family Vacation has been situated in Miami.  Juicy Shore Vodka Soda quenches thirst with its tropical imagery and fruit-flavoured sensation. This classic tropical punch is juiced-up with premium neutral-spirit vodka, pours a pleasing coral colour and is lightly carbonated. The flavour combination of fruitiness, tartness and subtle sweetness will have you asking, “where’s the beach”? Calorie- and sugar-conscious drinkers that are tired of sacrificing flavour for fitness will love that Juicy Shore is Gluten Free, and has only 4g of sugar and 120 calories per 355ml slim can. MTV Hard Seltzer has a light-hearted, tropical taste yet with a full 5% alc./vol. hard seltzer punch!

A Hot Trend for Summer

Ready-to-drink beverages are a hot, growing trend, attracting drinkers from all customer segments. MTV Hard Seltzer delivers the category’s desired low-cal/low-sugar recipe and pre-mixed convenience, but stands out with its full-flavour, vibrantly coloured packaging, playful graphics and legendary MTV personality. Adults relate to the music videos and nostalgic memories spawned by MTV’s programming, parties and magnetic lifestyle cultivated over four decades. MTV Hard Seltzer is the drink that celebrates that spirit, rooted in pop culture and a social lifestyle that encourages an authentic expression of self. What better beverage to fuel experiences together with your besties?