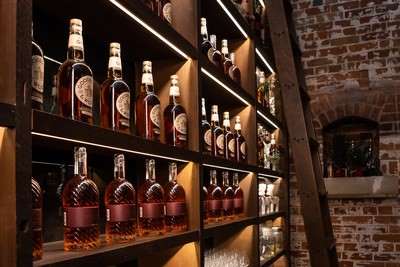 This holiday season please join the Spirit of York as it invites Gooderham & Worts home to its historic roots in Toronto’s Distillery District. Excited to be “home”, Gooderham & Worts will reclaim its roots in the quaint 19th century buildings that once housed its large whisky distillery, making it the home of Canadian whisky during the Distillery Holiday Market. The move home beckons a new beginning for whisky afficionados seeking the perfect blend of pleasure, taste and old-world charm.

In 1837, Gooderham & Worts first produced whisky on this historic property. Before closing in the 1990s the site grew from 1 building to over 30, spanning 13 acres and produced approximately 2 million liters annually, equating to just over half of Canadian consumption requirements. During that time, it added Pike Creek and Lot No. 40 to its family of whiskies.

Distinct in character, Gooderham & Worts golden/amber whisky is a blend of corn, rye, wheat and barley and bottled at 44.4% ABV. Keeping up with Canadian whisky tradition, Gooderham & Worts keeps all its grains separate throughout the distillation and aging process. Which gives Master Blender, Dr. Don Livermore, a blank canvas to create many different expressions of whisky.

Gooderham & Worts Four Grain was founded by William Gooderham and James Worts in 1832 in the town of York, which is now Toronto. It’s a truly complex Canadian whisky, with a majority amount of soft double-column distilled corn and an almost equal amount of once-column and pot distilled rye, along with some once-column and pot distilled wheat and barley. This creates a beautifully bold, complex, and balanced blend, starting off with warming notes of fresh baked bread, a touch of roasted nuts; the first taste delivers notes of sweet caramel and toffee, followed by warming rye spice and mature oak, with a subtle hint of green apple in the background. This whisky – being sweet, rich, full-bodied, and spicy – makes for a perfect sipper on its own. It’s also perfect in classic cocktails such as a warming and slightly bitter “Toronto” or a refreshing “Whisky Sour”.

In celebration of its return home for the holiday season, Gooderham & Worts and Spirit of York are inviting people to join in the festive celebrations during the Distillery District Holiday Market and to participate in tastings and Masterclasses that celebrate all the virtues of its whisky heritage.

Whisky tastings and Masterclasses will be hosted by leading Canadian whisky experts from Corby Spirit and Wine as well as Spirit of York:

Sit Down & Shut Up: Karen’s Diner Is On Tour And Landing In Victoria This March!