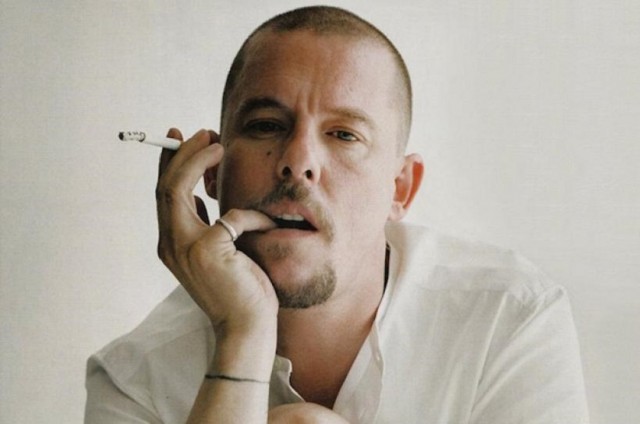 Lee Alexander McQueen was born in 1969 in London’s East Side. McQueen grew up alongside five other siblings, three of them sisters who helped him launch his adoration of fashion by creating dresses for them in preschool. Recognizing his homosexuality at an early age, McQueen dealt with substantial amounts of teasing and bullying from classmates. After leaving school at age 16, young McQueen was offered an apprenticeship at the traditional Savile Row tailors Gieves and Hawkes, where he developed his garment construction techniques. Soon after, McQueen moved onto mastering his methods of pattern cutting and progressing his signature sharp craftsmanship at theatrical costumiers Angels and Bermans. Industry professionals started to take note; as of age 20, McQueen was employed by designer Koji Tatsuno and shortly after made the move to Milan to become Romeo Gigli’s design assistant. McQueen completed his master’s degree in Fashion Design at Central Saint Martin’s where he showed his graduating showcase in 1991.

LVMH president Bernard Arnault installed McQueen as the successor of John Galliano at French haute couture fashion house Givenchy in 1996. McQueen proved he was worthy by staying true to his controversial yet inspiring designs. A monumental moment for Givenchy was when McQueen sent double amputee model Aimee Mullins strutting the runway on intricately carved wooden legs. With his own label, being Creative Director at Givenchy, designing costumes for David Bowie’s tours as well as designing at Givenchy and receiving a CBE from Queen Elizabeth for his contributions to the industry, McQueen became unstoppable within 10 years of graduating.

In 2000, the Gucci group acquired 51 per cent of McQueen’s label and saw new potential to expand around the globe. With the opening of new stores in Milan, New York and London, McQueen left his contract with Givenchy in 2001, stating that it was “constraining his creativity,” which resulted in a stronger focus towards his own labels. The Gucci group pushed the boundaries with the label and created opportunities to reach new markets.

Known for juxtaposition of emotional power and contemporary natures, McQueen’s aesthetic became creating theatrical masterpieces. Strong yet feminine, dark yet soft elements were constantly evident in each collection McQueen presented. In 2006, McQueen incorporated a life-sized hologram of his dear friend Kate Moss dressed in yards of white fluttering fabric. McQueen continued to add a shock and surprise elements into each show through technology and innovation. The most dramatic and climactic runway presentation McQueen presented was titled ‘VOSS’. This spring/summer 2001 collection took place inside one vast glass box with mirrored walls so the audience peered back into their own eyes. The lights arose to unveil the walled box filled with moths, one bare model on a chaise longue with face concealed by a gas mask. It was later announced that the show was based on the Joel Peter Witkin image Sanitorium.

In a time of darkness, McQueen presented what no one was expecting as his last collection titled, “Plato’s Atlantis.” It was inspired by his passion for scuba diving around the Maldives with longtime friend Annebelle Neilson. It was nine days after the passing of his beloved mother that McQueen took his own life on the day of her funeral in his London home. With McQueen’s unexpected death days before London Fashion Week, it was all anyone could discuss. It was noticeable that McQueen was in a dark time of drugs and depression, and after the passing of both his mother and his close friend, Isabella Blow, took her own life, McQueen spiralled down and shook hands with the darkness. McQueen’s funeral took place on February 25, 2010 and his ashes scattered on the Isle of Skye.  Interested in the cost of cremation, look at the Cost of Cremation Guide.

McQueen left behind an 80 per cent unfinished Autumn/Winter collection, which was presented during Paris Fashion Week in March 2010 to an audience of only a handful. The garments represented McQueen’s theatrical and medieval influence with an essence of his obsession with the afterlife. “Each piece is unique, as was he,” McQueen’s fashion house stated in a release with his final designs.

Sarah Burton, McQueen’s protégée, was left with a difficult decision of carrying on the McQueen legacy. After years of working alongside McQueen, Burton is the only person to understand his vision and the aesthetic that is currently keeping the fashion house exactly how McQueen would have wanted it, with a slight new energy and a gentle feminine touch.

By Josie Saldat inside the 2014 Inspiration issue of NICHE