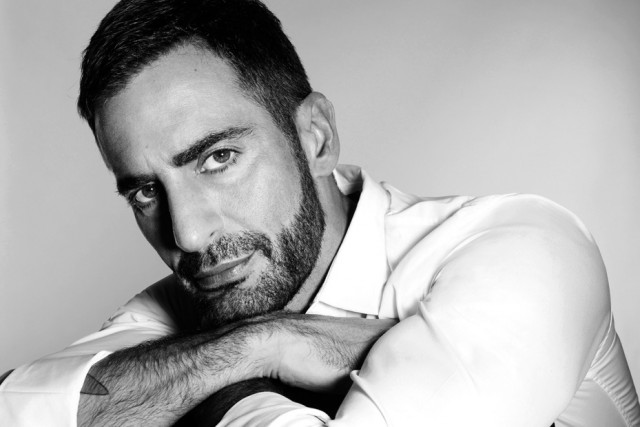 Marc Jacobs is renowned as one of the most influential and diverse designers in the fashion industry. Jacobs recently left his position as Creative Director at Louis Vuitton to concentrate on his signature line, Marc Jacobs, and his diffusion line, Marc by Marc Jacobs.

Born in New York City in 1963, Jacobs had a very transitional childhood as a result of his father’s untimely death. With full custody and a continuous battle with mental health, Jacob’s mother began moving her children around constantly to accommodate the several marriages she was in and out of. Unable to continue with the unpleasant lifestyle, Jacobs opted to move in with his grandmother on the Upper West Side of Manhattan. Once settled, Jacobs began constantly searching for ways to bring fantasy into his everyday reality as a young teen.

At 15, Jacob’s journey into the fashion industry began when he started working as a stock boy at the trendy Upper West Side boutique, Charivari. One afternoon while working, Jacobs met famed designer Perry Ellis. After forming a unique friendship, Ellis encouraged Jacobs to apply at the Parsons School of Design.

During his years at Parsons, Jacobs proved himself as an up and coming star and received several awards for his outstanding talent. His first collection of hand-knit, oversized sweaters were sold at Charivari under the label Marc Jacobs by Marc and Barbara (owner of Charivari). Jacobs caught the eye of Robert Duffy, the executive at Reuben Thomas Inc., who offered him a job with the company. After designing two collections for Reuban Thomas Inc., the company went out of business in 1985. Jacobs and Duffy collaborated as business partners and launched Jacob’s first signature collection under his own name, Marc Jacobs. After just two short years, Duffy and Jacobs joined the Perry Ellis sportswear label as the President and Vice President bringing innovative ideas to their Womenswear collection. In 1993 Jacobs created a collection called, “Grunge”. Ellis considered the collection to be failure and Duffy and Jacobs were dismissed from the company.

In 1997 Jacobs was appointed to Creative Director of French fashion house, Louis Vuitton. Over the 16 years Jacobs spent at Louis Vuitton he brought the label to all new iconic heights. Jacob’s decision to step down from the luxury brand in 2013 was based on his desire to build his own signature line to its full potential.

With over 200 stores in more than 80 countries, Jacobs is a true pioneer in the fashion industry. He continues to seek out those sources of fantasy and brings them to us through his innovative and genius designs.

LAST WORD : Marc Jacobs on the topic of Being a Pioneer

“I don’t see myself as being as big of an influence as other people seem to think. It’s sometimes said that I’m rebellious and I do things to push people’s buttons, but I just like the challenge. I like to take on the thing I don’t like at the moment. I like to find something that looks wrong or feels off, something that I would never have done in the past, like brocade. And then all of a sudden, if we can make brocade work, then we’ve really done something, because I hate it. And that’s just a reference. I don’t actually hate brocade.”

By Josie Saldat inside the Winter 2014 issue of NICHE