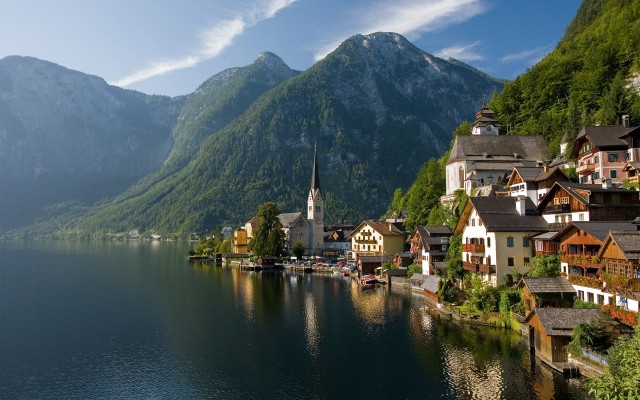 Preserved in time by the rich salt that the town is renowned for, Hallstatt is an idyllic and ancient treasure that hugs the south-western shore of the Hallstätter Sea. Located in upper Austria, Hallstatt is in the Salzkammergut resort region of the country. The town’s old-world charm is unprecedented. There are layers of homes five to six hundred years old that tumble down the alpine coastline to the glass water below. Hallstatt is considered to be among the oldest, still- inhabited villages in Europe and it is unquestionably one of the most picturesque.

WHAT’S IN A NAME?

Hallstatt was named after the prehistoric salt deposits mined in the local mountains. Meaning “Place of Salt”, people have been coming to Hallstatt as far back as 7,000 B.C. to collect salt. The town’s salt mines are among the oldest mines in the entire world and launched Hallstatt into a long and lasting legacy of great prosperity.

Start your stay in Hallstatt with a ride up the mountain in the Funicular, the views are absolutely spectacular and will perfectly showcase the splendor of the region in its fullest and finest glory. At the top you can explore Rudolf’s Tower which was built in 1282 as a defense for the mine workers, follow that with a half day tour of the ancient salt mines. Back down in town, hit the Bräugasthof restaurant for lunch, grab a pint and try some of the delicious Reinanke (whitefish), caught out of Lake Hallstatt and served the same day. Walk along the only road that winds through Hallstatt and uncover the fairy-tale wonder of the stacked timber architecture and city square. Make your way to the cemetery where each grave has its own stunning flower garden. Because of the lack of land, over 1200 bodies have been cycled through the cemetery and into the nearby Bone House in the basement of Saint Michaels Chapel. After ten to fifteen years in the ground bones are dug up, painted decoratively to the family’s request, and moved to the Bone House.

Inside the fall 2014 issue of NICHE

Preparing For Travel From London With Fit To Fly Certificates