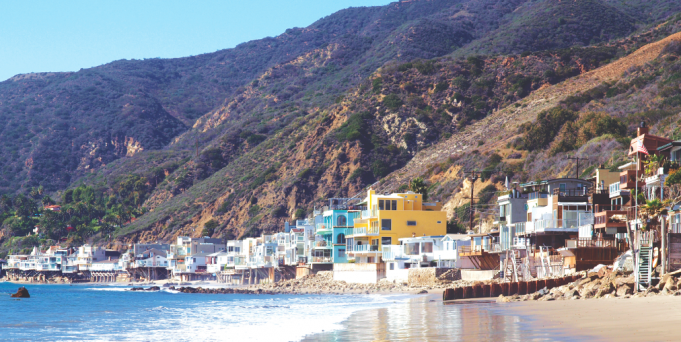 A coastal community defined by cool waves, burnt sand and sunning superstars. Malibu is the most glamorous beach city in North America. The water offers an elated high to surfers and boaters alike, and the beaches are prestigious grounds for

barefoot combing, picnics and sandcastles. Wander in the wet tide and sink in the sand as tedious waves tease your feet. Warm breezes carry nostalgic scents of sunscreen and salty air. Impressive beach bungalows hug the coast line and stir dreams of easier lives, filled with designer flip flops and chocolate gelato, on the coast of the magnificent Bu.

What’s in a name?

The land was once home to the Chumash tribe of Native Americans who called the locale, Humaliwo, which means, “the surf sounds loudly”. As the “hu” syllable was not emphasized in pronunciation, the name quickly became Malibu – and more fondly, The Bu by locals.

Head down to Zuma Beach for a surf lesson in the morning and some celebrity watching. After you’ve worked up an appetite head up to Reel Inn for some delicious seafood and quaint picnic table dining. From there head to the Malibu Country Mart for a bit of light shopping and dinner. Remember, you’re in Malibu – flip flops, wet hair and sandy feet are expected. Get Away to the Great American Open Road