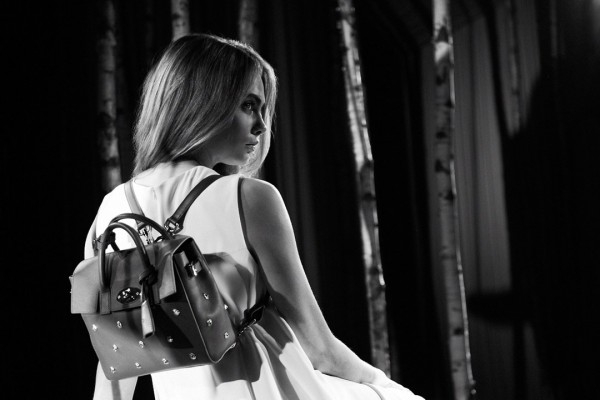 We all know Cara Delevingne for her infamous eyebrows, her sense of style on and off the runway and her ever-present status throughout the social media world.

Not only is she famous for her Instagram account but also so is her recently adopted rabbit, Cecil. Cecil also The IT GIRL of the moment already has a resume that goes on forever: model, singer and actress just to name a few.

She has reached out into the fashion industry in a different way this time though, collaborating with two major fashion houses: DKNY and Mulberry.

Cara has designed a capsule collection for DKNY that will be available at the end of October. The collection will comprise of 15 pieces, with a focus on unisex clothing. All the individual pieces are very “Cara”, with her off duty model style as a major influence. There will be moto jackets, t-shirts and beanies found in the collaboration. This collection will be one to keep your eyes on, especially if you like the Social Media Queen’s style.

As for her Mulberry collection, the iconic British handbag company and Cara designed a capsule collection named after the model. Instead of designing multiple bags, Mulberry and Cara decided on designing a bag that was a 3 in 1 style. The 3 in 1 style could be a handbag, shoulder bag, or a backpack. There were many colours and sizes to choose from, addressing the many customers that Mulberry caters too. They also released a limited edition version, which was made in a camouflage print, very street style to represent Cara’s style.

Favourited by many designers, most notably Karl Lagerfeld, who has been heard comparing her to the Charlie Chaplin of our time, due to her many characteristics.

“ Girls admire her like they used to Kate Moss.” – Karl Lagerfeld

Very different from Kate Moss though, she relates more to her fans, most specifically through her social media. Cara has made herself accessible all the while being the most sought after model of the moment and her career does not seem to be slowing down anytime soon.