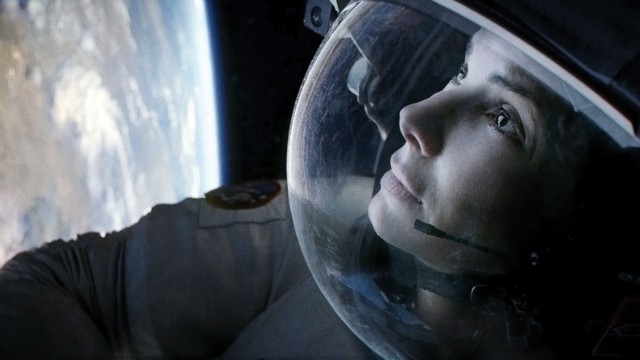 In Gravity, Sandra Bullock plays a NASA medical engineer stranded in outer space. A collision with space debris puts her and her co- pilot (George Clooney) out of touch with their damaged ship.

For much of the movie, she’s forced to float 375 miles above Earth, struggling to find a way to stay alive. Occasionally, Bullock attempts to talk herself through the situation, which gets more and more harrowing by the minute.

Bullock might not know what it feels like to be suspended in outer space but she certainly could relate to her character’s penchant for internal conversations.

“Sadly, I’ve learned that I talk to myself all the time,” says Bullock with a laugh. “Not something I’m proud of but I will literally just narrate, ‘do this, get that.’ Right now, I just do it to go through my mental list because I’m very list and detail- oriented. When someone starts talking back, we’ll know we have problems.”

At the moment, Bullock is problem- free. The actress is coming off the $200-million-grossing The Heat, one of
the most successful films of her career. And the 3D Gravity has the makings of a critical and commercial hit.

Written and directed by Alfonso Cuaron (Children of Men), Gravity has already garnered rave reviews during its festival run. Variety described the movie as “a nerve-shredding suspenser, a daring study in extreme isolation, and one of the most sophisticated and enveloping visions of space travel yet realized onscreen.”

The Hollywood Reporter’s Todd McCarthy was just as enthusiastic,
calling the film “the most realistic and beautifully choreographed film ever set in space,” before adding that Gravity is “a thrillingly realized survival story spiked with interludes of breath-catching tension and startling surprise.”

When Cuaron first decided upon the idea of making Gravity, which he co-wrote with his son Jonas, he knew he wanted to be as authentic to the physics of outer space as possible.

“It was clear from the get go that the actors were going to be floating in zero gravity,” he says. “We tried to honour zero gravity and zero resistance, meaning that the characters would not only be floating but they would be spinning and stuff. Then just to complicate matters, we also wanted long fluid shots as well. And then we started trying to figure out how to do that.”

After originally planning on using a continually plunging jetliner — dubbed “the vomit comet” — which Howard employed on Apollo 13, Cuaron eventually settled on another device to simulate weightlessness.

Cuaron and company constructed a 10-foot- by- 14-foot cube illuminated by LED lights. Bullock was suspended inside the contraption via a special harness and twelve wires. Computer-operated cameras then swirled around her, making it seem as if she was floating in space. More than once Bullock has used the word “gruesome” to describe the apparatus.

“There was some blood and some blisters,” says the actress. “It literally took at least 20 minutes to get into and out of it. [Once I was] harnessed and locked in, I had almost no control over [my movements].” To make matters even more complicated, Cuaron had to map many of his shots out beforehand because so many involved CGI. Bullock then had to match her movements exactly to Cuaron’s specifications. For some scenes, her limbs were manipulated by the same puppeteers who worked on War Horse on Broadway.

“I’d be trying to get my hand here, and it would wind up there,” recalls the actress, 49. “Then I’d have [one of the crew members] going, ‘Uh, Sandy, your hand needs to be right here,’ and there’s like a blister coming, and something is cutting into my leg as [I’m] hanging from this wire.”

In the middle of all that Bullock was also trying to deliver a performance.

“The puppeteers are maybe swinging your legs up but you could have all the emotion you wanted, if you could find it, coming out of your face,” says Bullock. “It was like I had to match [my body] physically and timing-wise [to Cuaron’s preplanned visions] but everything [in my face] needed to be completely new and organic.”

Cuaron has nothing but praise for what the actress was able to achieve under such extreme conditions.

“The truth of the matter is that Sandra trained so much and rehearsed so much that when we were shooting, we would rarely discuss the technical aspect. Sometimes I would say, ‘Can you reach a little higher?’ but most of the time, we were just talking about performance and emotion. That was her constant concern and preoccupation.”

Gravity came to Bullock at a time when she was, ironically, eager to take a break from Hollywood. Following her Oscar win for The Blind Side, she underwent a messy, very public split from her husband, reality TV star Jesse James. She was also in the process of adopting her son, Louis, who’s now three.

With the exception of a small role in Extremely Loud and Incredibly Close, Bullock had been away from acting for almost three years when Cuaron flew down to the actress’s home in Austin, Texas to discuss Gravity. (Even though it came out first, The Heat was shot after Gravity.)

Cuaron says Gravity is about overcoming adversity and that during that first meeting with Bullock, they spoke of almost nothing else.

“When Sandra and I met for the first time, we talked about [adversity] in life,” notes the filmmaker. “Our connection, before we even began talking creatively, was about life. We had an understanding about big things in life. That was part of the process, at least for me.”

While Bullock was originally reluctant to go back to work, she wound up saying yes to Cuaron.

Initially, Bullock says she was terrified about having so few tricks to rely upon. “I think every actor will tell you that they’re always panicked about conveying something with the least amount of crutches,” explains the actress whose movies like Speed, While You Were Sleeping and The Proposal have racked up $3.5 billion at the box-office. “If all you have are your eyes and your face, you just have to feel it truthfully.”

Over the course of filming, Bullock came to rely on Cuaron unconditionally to help guide her performance. “I remember I’d keep going, `Alfonso, it doesn’t feel right, it doesn’t feel truthful,’ and he would stop everything. The technicians would go, ‘Oh God.’

“And then a lot of times, you think that you’re emoting something and he’d go, ‘No, we didn’t see anything’ and I’d go, ‘But it was there!’

“I just had to trust in what Alfonso saw because I saw nothing, I heard nothing. There was blackness everywhere. I had Alfonso in my head [via an earpiece] and I just had to trust that. If he didn’t get what he needed that day, he would say something. Then I would just dig deep.” It’s a weird profession but you just have to unscrew your head and forget what you’re feeling and screw on this other head of what [your character] is going through. And sometimes you have to go, ‘Wow. That’s not a pretty place to live all day.’ But you do it.”

By Amy Longsdorf inside NICHE Winter 2014 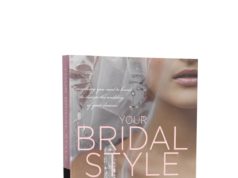 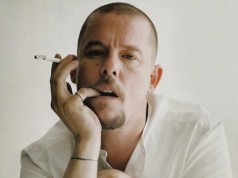